Two weeks ago we announced that Canon was attempting a new world record for the longest continual digital print by using an imagePROGRAF PRO-6100 printer based at the top of the famous Schattenberg Ski Jump in Germany during the famous Oberstdorfer Photo Summit.

Well this week we’re very proud to inform you that after 16 hours in near freezing temperatures, rain and snow, and under the watchful eye of the officials from Guinness World of Records, a new World Record of 109.04 metres was established.

The images were printed on water resistant media and incredibly the entire print only used 1.37 litres of ink! Imagine that, potentially there’s enough free ink in every box* to print 300 metres of 60-inch-wide, colour photographs…isn’t that amazing?

Faultless, high-quality, continuous, water-resistant printing, in freezing temperatures…and still have the potential to accomplish this feat another two times before the ink ran out. Who wouldn’t be impressed by that? 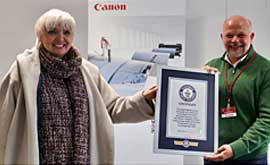 Our all in one offering of delivery, installation, training and on-going support, means our clients have complete peace of mind. From sales and leasing, to ink and peripherals, Cando have you covered.